skip to main | skip to sidebar

This weekend I am planning on making my dad's famous garlic pork recipe (don't worry, I will be buying the pork already prepared at Frys) (see first blog)!

A new chapter..... (copyright (c) 2009).  The recipe that I am going to use,  was handed down from a long generation of our Portuguese side, which dad learned from his mother who was born in Madeira.  My mum, brother, two sisters and I have watched and assisted dad over the years as he prepared the pork for the inevitable traditional Christmas morning breakfast feast.  On one of my recent visits to Trinidad, I again had the opportunity to assist him with this very big production.  He ordered 'two back legs' from his favorite butcher and requested that it had just the right combination of meat and fat (not too lean and not too fat).  We then went to the market where he purchased several pounds of garlic, some small leaved French thyme, two hot Scotch Bonnet peppers, and several bottles of vinegar.

Back in the kitchen, we placed a plastic cloth on the table, and layed out all the elements needed to complete the preparation.  Dad took the pork legs outside, and used his special cutlass (machete) to chop the meat up on his chopping board (sliced from a very large tree-trunk of Guyanese hard wood) which he has had for years.   He then de-boned the pork legs and cut them up into 2 inch squares.  The large leg bones which still had some meat on it, were put aside to boil as a special treat for his hunting dogs.  The meat was then placed in a large glass bowl on the table, to which was added enough vinegar to cover the ingredients.  There were two other bowls on the table with a solution of 1/2 vinegar and 1/2 water.  We proceeded to peel the several pounds of garlic and place them in a separate container, and we stripped the leaves off the stalks of the Spanish thyme.  Dad then pulled out his two very old earthenware containers (demi-John's) which he has managed to keep for over 30 years, sterilizing them with boiling water.  These containers are used to put the prepared pork into,  where it would stay covered and 'marinating' for about 5 days before the meat can be prepared for eating.  So with this assembly line, we washed the pork in the first container of pure vinegar, then squeezed the liquid out of this pork, and placed it into the second container of the vinegar mixture.  We repeated the process into the third and final mixture. We then placed layers of pork, salt, garlic and thyme into the earthenware containers, and repeated this process until the jars were full and we used up all the pork. At this point, dad mixed a fresh solution of vinegar and added some salt to it until it tasted 'sweet' (don't ask)!  This liquid was then added to the jars until all the meat and contents were covered.  He then added one whole pepper to each jar and sealed them.

Needless to say on Christmas morning, dad got up early, had his 1/4 cup of coffe (instant Nescafe and condensed milk) removed the meat from the jars, par-boiled it in water and then proceeded to fry the pork, assisted by it's own perfect portion of rendered fat and a 'little bit of ham'.  It was fried to a golden brown color and a soft texture.  This wonderful smell permeated the entire house, woke the balance of the family up, and this special breakfast was thoroughly enjoyed by all!

I have to also let you know, that while we were preparing the garlic pork, we were also having a couple drinks of  'rum and coke' as this is also part of our (dad's) tradition.....   :)


So as I said, my wonderful hubby (Sweetie) and I will be preparing our garlic pork this weekend and hoping that it comes out as delicious as my dad's always has over the years.  I have a feeling though that it will be missing some of his unique touches! 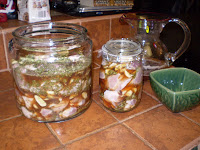 Shandy Girl
Born in the Caribbean, is a Canadian Citizen and a US Resident. I love all warm countries and most of all, the beach, the water, and ocean breezes!